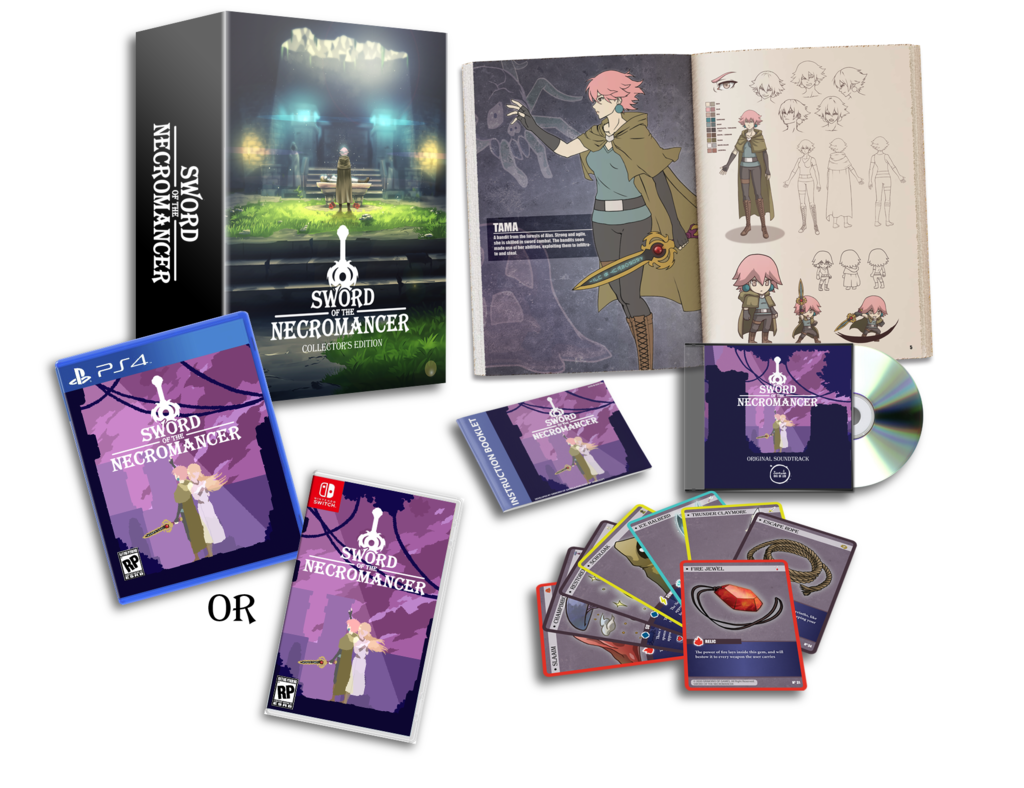 Sword of the Necromancer

Latest Updates from Our Project:


All week from October 7th - 13th, the Steam Game Festival will shine a spotlight on all the new exciting games due to be released within the next six months. As part of the festivities, Sword of the Necromancer will have a 24/7 live-stream of the first two levels containing two of the five bosses from the game. Also, during the festival players will be able to get their hands on a playable demo of the first level of the game.


Backers with a pledge tier of Beta and above will also be able to play an extended demo, with a second dungeon floor, new monsters and a new boss! This extended demo is available now and you are free to share gameplays and screenshots (unlike with the closed beta).

Today is a special day, and alongside the Steam Game Festival, we have got Nintendo, Playstation and Xbox to share our announcement trailer at the same time!

Finally the release date of the game will be December 10th. We were aiming for a late November release (November 26th), but we decided to delay it a bit to distance ourselves from some big title releases (Cyberpunk 2077, Hyrule Warriors, Assassin's Creed), and events like Thanksgiving and Black Friday.

We are sorry to delay the release, even if it's a slight delay. Rest assured that we will use the extra days to better polish the game.


Thank you very much for your support!

We have sent the instructions to start playing the Sword of the Necromancer Beta to those backers who enrolled in the beta and sent us the signed NDAs back. Please check your spam folder if you don't see the email.

As the beta testing has officially started, we will not accept any more testers or signed NDAs to participate.

To report bugs and discuss the game, please use the private Beta Testing channels in our Discord Server, and remember that according to the NDA, you cannot share any info about the Beta outside those channels.


Kind regards, and thank you for your support!

Hi everyone! This will be a quick update.

Our initial plan was to have the beta version ready for yesterday, take a day to check things and upload it to Steam and make sure everything works, and Beta Testers would be able to start playing tomorrow Wednesday.

We've had a few problems (one of them being our artist's hard disk drive breaking, luckily no data was lost, but he couldn't work for a couple of days until the computer was fixed), and there are some things that are not ready yet. We will need some more days to have it all, but as we said in our last update, you will certainly have the beta before the month ends anyway (there's not that much left).

We are sorry, but sometimes there are things out of our reach ^^U

Sword of the Necromancer GTM cover

GTM (Games Tribune Magazine) is an award-winner Spanish independent magazine about the videogame industry, which features quality articles and reportages.

One of its quirks is that every month they offer two possible covers. As if it's a subscription-only magazine, subscriptors get to choose their preferred cover, but GTM always lets people vote for the "default" cover of that month's magazine.

The header image of this update is the cover we submitted for GTM, made by our artist CasualMisfit, for the October issue. In this issue of the magazine, GTM will interview us about Sword of the Necromancer and we will explain some details in exclusive.

You can help us by voting for the Sword of the Necromancer cover in this Twitter thread.

Thank you very much, and kind regards!

Hi everyone! We hope you are having a nice summer!

As we said in our last update, we are working (a lot) to have the closed beta ready for September. We will try to have it as soon as possible, but rest assured it will be on that month.

If you chose to participate as a beta tester, please check your mail for the Non-Disclosure Agreement, and send it back to us signed (and the extra info we need). You have time until beta officially starts!

As we also said in our last update, Sword of the Necromancer has been selected for the Gamescom 2020 Indie Arena Booth(August 27-30). The header image for this update is our virtual booth, where visitors will be able to learn about the game.

Also, we will make the Sword of the Necromancer Demo (which was until now exclusive for the Beta Tester and up tiers) public for everyone during the event days (August 27-30) and host a streaming on our Steam page with the gameplays some backers have sent to us.

Both downloading the demo and adding the game to your wishlist would help us a lot to gain visibility in the Steam store (which, if case you don't know, is harder every day, so that'd be much appreciated!).

We will soon write another update with the links for all the events!

Sword of the Necromancer on GOG

Sword of the Necromancer will be available in the GOG.com store too! As with all GOG releases, this version will be DRM-Free. Keep in mind that backers who chose PC platform will receive the Steam key only as we originally stated.

The Japanese translation is already finished, and to help us with the game's release in Japan we have decided to include Japanese Voice Acting, alongside the English one. The English voice acting is already finished and we are currently implementing it in the game. As it ended being less expensive than expected, we have decided to add this new language.

We will set a casting call very soon, if you are a Japanese Voice Actor or know someone who is, keep tuned!

Dwerve, by Half Human Games, is a Tower Defense Dungeon Crawler RPG with Roguelike elements who has started its Kickstarter campaign just today!

Dwerve combines action with strategy, in a game where you have to think very carefully where to place your traps and turrets to survive.

It will feature a lot of content, secrets and (not very common in this kind of game) an interesting story about the fight between the dwarfs and the trolls.

Help them reach their goal and make the game a reality (and also its console versions!). You can also help them by wishlisting the game on Steam.

The ogre Skullcrusher will appear in the Necromancer's dungeon as a fast and strong enemy. Be wary of its pillar! They aren't named Skullcrusher just because!

You will also be able to summon the Skullcrusher by using its IR Code!

Hi everyone! This will be a quick update to inform you about the project's current state.

We keep working at full throttle (which is being a real challenge with the warm weather we are having right now) to have the beta ready soon. We are all healthy and safe (and wearing our face masks when we go outside)

For the backers who agreed to participate in the closed beta (by answering the Backer Survey we sent back in June), we have sent the NDAs you have to sign if you want to get access to the beta in September. Please answer the mail as soon as possible.

If you didn't receive the mail, it probably is because you didn't answer the Backer Survey (which is closed by now). If you did, check your spam folder.

This month of July we had a casting to select the English voices of Sword of the Necromancer's characters. We received over 1000 auditions, and there were lots of talented voices!

The selected cast is:

We have recorded almost all the lines and we are excited to let you hear them!

Finally, Sword of the Necromancer has been selected for the Gamescom 2020 Indie Arena Booth (August 27-30), that this year will be online for obvious reasons. We will have a virtual booth you all can visit, and participate in several digital events.

We keep working for the game to be ready and the best it can be!